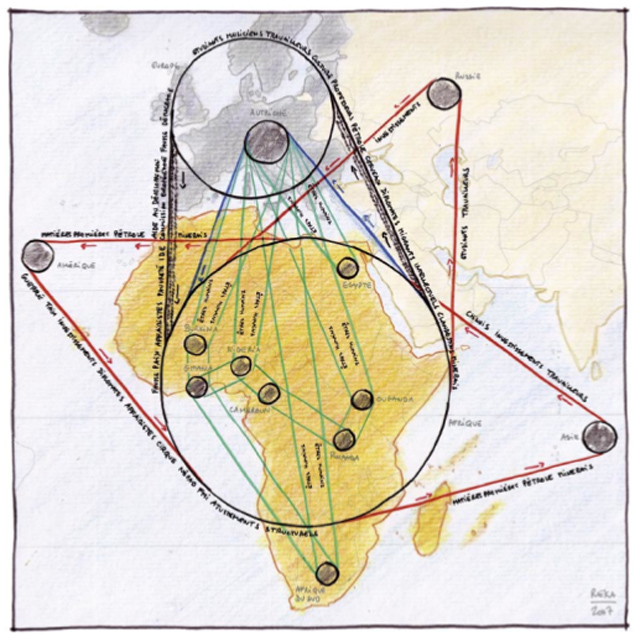 Maps are not the same thing as territory. At best they are only a representation of reality on the ground. Maps merely reveal what map-makers or their superiors want to show. They inevitably present a truncated, partial, even deliberately misleading picture of reality. Readers may be taken in by the final form of a map, with its mass of details and neat precision. Merely being printed gives maps some authority, and they often bear the seal of governments or international bodies. But even the most detailed topographical maps demand considerable imaginative thought and painstaking design, each item being carefully chosen, some highlighted, others disappearing altogether. The individual or organisation producing a map is responsible for selecting objects and events, as well as deciding how they are visually represented. Their work demands imagination and creativity, but there is also scope for lies and manipulation…

Philippe Rekacewicz is a geographer, cartographer and journalist. After the completion of his study in geography at University of Paris la Sorbonne, he became in 1988 a permanent collaborator of the international monthly Le Monde diplomatique in Paris (today 70 editions in more than 30 languages). He follows particularly issues such as demography, refugees and displaced persons, migration and statelessness, as well as environmental questions. More broadly, his work is concerned with geopolitics and geostrategy. Philippe also leads number of other project which bring together cartography, art and politics, especially studying how communities and political or economical powers produce the cartographic vision of the territories on which they operate, and how they can manipulate and lie with maps.

Eyal Weizman (Centre for Research Architecture, Goldsmiths) will be the discussant.

Organized by Xenos and the Department of Sociology at Goldsmiths.

This entry was posted in Events. Bookmark the permalink.