Interview on fascism, fanaticism and the Left 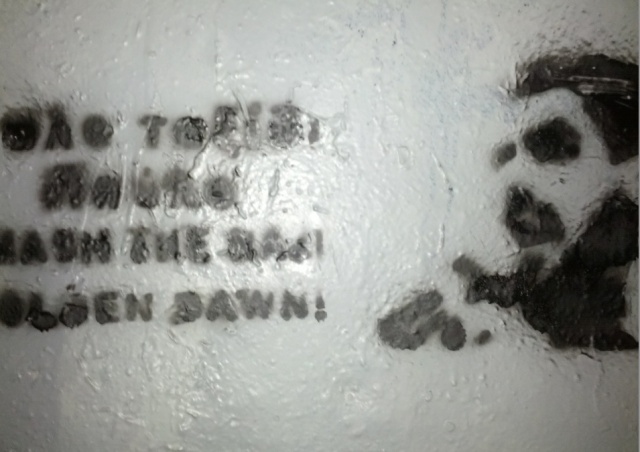 Below the original English transcript of an interview published yesterday in the Greek daily Εφημερίδα των Συντακτών/Εfimerida ton Syntakton (The Editors’ Newspaper) with its political editor Tassos Tsakiroglou.

TT: In Europe we face the revival of some irrational or even real fanatical movements of the extreme right and the Neonazis. In Greece we have the Golden Dawn party, which attacks and kills immigrants and Greek antifascists. What does it mean according to your analysis of fanaticism? How can we confront this setback to forms of irrationality and fanaticism?

AT: Analyses of, and political responses to, fascism have often oscillated, since the interwar period, between focussing on its irrationality – its open scorn for dialogue and criticism, its infatuations with occultism, its cult of thoughtless violence and virility – and revealing its profoundly instrumental, and in its own way rational operations – for instance as a tool of class struggle from above. The Nazi extermination of European Jews (alongside Roma, the disabled, and political opponents) is in a way the emblem and culmination of this: at one and the same time the greatest affront to ‘Reason’ and the inhuman apex of bureaucratic rationality. The Nazis were fond of praising their own ‘fanaticism’ but were also capable of operating with matchless calculated cynicism. In this sense, despite what a certain liberal common sense may suggest, irrationalism or fanaticism are neither sufficient nor even necessary conditions for fascist politics. Besides the urgent demands of anti-fascist organising, and the ever necessary work of education and critique, I think the Left should be wary of only confronting the phenomena of extreme-rightist irrationality and violence, and truly attend to the sources of the strength of the far right – especially its ability to rally downwardly mobile strata of the population that much of the institutional Left has often ignored. Here I think it is not irrationalism or fanaticism which are the key question, but racism as the defining way in which the right has been able to obscure or distort crisis, unemployment or exploitation, using the ancient but also hideously modern technique of turning ‘others’ into scapegoats, displacing responsibility from capitalists to immigrants, and promoting the grim fantasy that without ‘them’, ‘we’ would live in some kind of autochtonous idyll.

TT: We see in different parts of the world the use of religion as a political force. What’s its real role and impact in nowdays societies and how does it shape the notion that West has for Otherness, especially for Islam?

AT: Religion is a notoriously slippery idea: in the present moment we can witness both apparent resurgences of religious forms of politics and ongoing processes of ‘secularisation’. Though it would be mistaken to ignore the relative autonomy that religious phenomena have, I think for the most part religion has functioned as a lure or a screen that has blinded much Western opinion to the political dynamics of the so-called Muslim world – namely those giving rise to the ongoing movements and uprisings in North Africa and the Middle East. One thing the latter have shown is that ‘political Islam’, through its various rises and falls, is a very unstable, contested entity, and though religion is a potent vehicle for mobilisation (especially in civil wars) it is very contradictory when it comes to the government of subordinate capitalist societies. Though religion – and today perhaps Islam in particular – can provide very powerful images of justice and vocabularies of vindication, I think we cannot treat it as a political force in its own right, as though class and group conflicts were themselves ultimately understandable as clashes of civilisations or theologies. They are not.

TT: West has often used the term “fanaticism” in order to demonize, stigmatize and psychologize any non-liberal politics or anticapitalist movements. What’s your point of view?

AT: In my own work, I’ve tried to trace, from a rather philosophical perspective, the trajectory of this demonizing tradition of anti-radical thought and practice in the West – from Luther, through to Orientalist images of a fanatical Islam, on to radical abolitionist movements against slavery and the Cold War campaign against communism as a political religion and Third World movements of national liberation. In brief, the mainstream liberal idea whereby fanaticism – understood as a drastic refusal of compromise (whether on the basis of abstract principles or particularist attachments) – is the chief cause of today’s violence is a deeply flawed one, ignoring both the structural violence of capitalist accumulation and the carnage and cruelty generated by soi-disant ‘moderate’, ‘liberal’ or ‘democratic’ political actors. Some of the salient aspects of ‘fanaticism’ as it has historically been defined – unwavering conviction, attachment to principles, partisanship – are also crucial moments in any politics of emancipation.

TT: Greek government has unleashed an unprecedented attack on the public university, promoting the private interests in Education. What’ s the consequences of such a policy for the country and its future?

AT: The privatization and marketization of education worldwide has had entirely predictable (and, as far as its promoters go, desired) consequences: a widening of class and income disparities; a devaluation or outright exclusion of scholarship deemed unprofitable; an intensification in forms of punitive labour management; an impoverishment of public culture; the hegemony of debt over everyday life. As this has been the case in economies that were, at least by neoliberal metrics, growing, we can only imagine – or, alas, we can already see – what it does to countries experiencing brutal waves of what David Harvey has termed ‘accumulation by dispossession’. The brutal naturalization of class privilege and the disparaging of any meaningful conception of culture or education are writ large. Which is another way of saying that the extreme application of a certain definition of rationality – market rationality – can be the handmaiden of the most pervasive irrationalism and anti-intellectualism.

TT: What we see under a regime of neoliberalism is that “the much-vaunted shrinking of the state has meant a hypertrophy of its repressive apparatus, a low-intensity war of the state against society on behalf of the markets”. Is the Left capable of elaborating a new political program and an inspiring utopia against this regime?

AT: While in much of Europe and beyond the so-called Left has certainly been short of inspiration (though in this Greece does seem to differ considerably, for instance from my home country Italy, where the political panorama is breathtakingly bleak), I am not entirely sure that its due to a deficit of a new programme or indeed of a utopia. We’re in the peculiar predicament that what some years ago may have appeared as reformist to a radical Left now looks like a unfeasibly utopian demand (public education, welfare provision, mildly redistributive taxation regimes, etc.). Part of the reason for that is quite concrete: notwithstanding its plunderous excesses, even if these were duly reined in, it’s not at all obvious that contemporary capitalism could provide the livelihoods we associate – depending on our nostalgias – with the postwar ‘welfare state’ or with the (debt-fueled) ‘growth’ of the nineties. But the Left today – beyond making the struggle against fascisms and racisms and sexisms crucial to its outlook – needs to root itself precisely in these question of social reproduction and everyday life. It may be impossible (from the vantage of market rationality, credit agencies, the troika…) to have a publicly funded health system, but it’s also necessary… Any programme needs to start from these basic battles, and the Left needs to prove that its organisations can both make gains in the present, which means defending interests and responding to needs and have a truly anti-systemic prospect in mind, at one and the same time. This will also involve humility – namely, recognising the movements and forms of resistance (against evictions, privatisations, racism) that already exist and showing how a broader organisation of the Left can make them more powerful, rather than vice versa. In this respect, new ideas are perhaps not the priority.