For a Left with No Exit (Night and Fog in Japan) 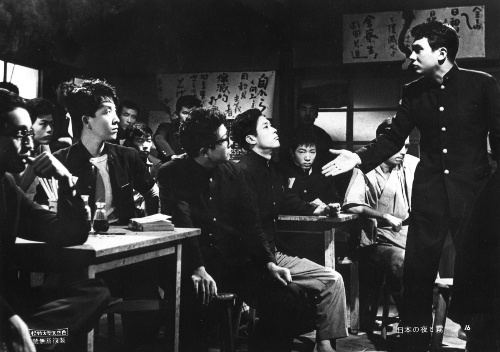 This brief essay was published in 2013 in the third print issue of the great online film journal La Furia Umana.

In Oshima’s critical writings from the period around Night and Fog in Japan (1960), two related terms stand out, tension and instability. The ‘history of bad faith’ which, according to Harry Harootunian, constitutes the human material of the film saturates the physiognomy of the actors. But it is also, primarily even, borne by the camera, in sequence shots that linger on the wracked faces of the militant students, or their later, drained selves.

Oshima’s credo of ‘one scene, one shot’ was presented as a distillate of the film-makers method, a means of stamping out visual stereotypes and allowing the director’s ‘stream-of-consciousness’ to respond to the unrepeatable ‘physiology’ of the actors. In 1960, he declared: ‘The first films worthy of the name will be those in which every shot incorporates the same level of critique that informs the work as a whole’. If ‘every shot must be critical’, it is also in the sense that every shot must be shadowed by a kind of crisis, or indeed an instability.

This is not (only) an aesthetic, or even metaphysical, question. It is a technical one, a formal potentiality of the telephoto lens. Critique (or self-criticism) and (political) crisis are both the method and the theme of Night and Fog in Japan. Foreshadowing the even bleaker set-scenes in Wakamatsu’s Ecstasy of the Angels or United Red Army, which inspect the wake of the Japanese Left’s lacerations a decade later, the funereal wedding in the fog and forest-bound house, which functions as the film’s pivot, is nothing if not a melodramatic, domestic translation of the struggle session. The verbal violence of the party meeting is overlaid with the repressions and regrets of the (petty-)bourgeois interior.

The theatricality of Night and Fog in Japan, about which Noël Burch made some important remarks in To the Distant Observer, intensifies the claustrophobia resulting from the political impasse of 1960, after the defeat of the movement against the US Japan security treaty (ANPO), a defeat in a sense prefigured by the sophomoric show-trials and paranoid recriminations of the dormitory scenes from the early fifties. But the wilful anti-realism (or counter-realism) that pushes Oshima suddenly to isolate characters with spotlights on a background of darkness, or petrify them by flash-photography before a frieze of red flags, is not a formal affectation. It cleaves mercilessly close to the abstraction and enclosure of those groups of Japanese communist students earnestly miming Bolshevik discipline. Consider, for instance, how the spotlit faces of the wedding couple and their guests are reversed in the scene where the students-turned-interrogators are giving the third degree to one of their comrades, guilty of having let a supposed spy escape their makeshift prison.

With the exception of the thoroughly allegorized intensity of the blood-stained defeat of 15 June 1960, the film unfolds, or rather fractures, through a series of Sartrean huis clos: dining room, hospital, dormitory, meeting room. Outside, the indeterminate, phantasmatic fog, and, briefly, bouts of communal singing and dancing, themselves undone by the insistence of the late romantic soundtrack (when Shostakovich is played and celebrated by the effete party hack Nakayama, the claim about the Russian composer’s socialist realist purity is corroded by the context).

The very scenography of the film underscores the predicament of a militancy trapped in mimesis (and in a sui generis instance of the misery of student life); the dormitory room is graffitoed with disconnected mots d’ordre: cogito ergo sum, l’être et le néant, pendre la bourgeoisie (these three grimly framing the suicided body of Takao, the supposed ‘traitor’), K. Marx, Lenin (in cyrillic). When Sakamaki pontificates to his reading-group comrades about ancient materialism being ‘cut off from reality’, the performative contradiction is almost too blunt. The spaces of study, like those of the meetings, are caught in a kind of loop with the domestic interiors, still charged with a collective hope but also presaging the traps of stability and involution. The interior of the group and the interior of the home, oscillating between claustro- and agoraphobia, hatred of the outside and inner disgust, echo one another. The commonality, the Sartrean fusion, comes with the group-singing (though this is an object of the activists’ own later scepticism and scorn), but more profoundly, and despairingly, in the affirmation of a common pain (or in the attempt to draw authenticity and intensity from the foregone defeat of the anti-ANPO demonstrations).

Oshima  suggested that the film is in a sense redeemed by its one genuine moment of emotion (more precisely, we could add, of an emotion not in the register of anxiety): the mournful singing at the death of a student, brought to a dramatic pitch by the silhouetting of the grieving faces of the protesters against the night (this is paired with the passing by Nozawa of the red flag to the lone Trotskyist student, who has decided to hold the line, in spite of the party and the odds). The collective is both fused and wrecked in defeat.

Arranged around this moment of militancy and mourning, the film proceeds as a melodrama of factional struggle, in which the fragmenting of the collective is not the occasion for a revanchist individualism or a liberated subjectivity, but the prelude to two dead ends: the authentic suicide and the reintegration through bad faith into family and party (here Nakayama is the perhaps too unequivocally the negative hero of the film). Technique and motif, form and content, are also inextricable; Oshima’s ‘one shot, one scene’, with its rejection of the visual cliché of dialogue and confrontation (shot/countershot), and its lateral displacement (unhinging focus and voice) produces the aesthetic of a particular politics.

This is the politics, or rather the political impasse, of factional discord, devolving into what Sartre called seriality (the mute, anxious looks of the erstwhile comrades at the wedding serving as a kind of chorus of defeat, with the searing image of a parade of torches as its aesthetic transfiguration). The theatricality of the tableau vivant is riven with the tension, with the instability accorded to it by the nervous, dissonant melodies of the music and the camera’s slow impatience. Artistic and political form are both affected by the movement of what Oshima, at the time, called self-negation (‘A production must not be an explanation of the script; it must be a reality-based negation of the images expressed in the script and a discovery of new images using that negation as an opportunity’). But can this negation only issue into what one of the young comrades refers to as the ‘eastern nihilism’ that Takao draws from the writings of Lu Xun?

What the adamant Stalinist views as the Chinese writer’s petty-bourgeois decadence, Takao, seconded by Takumi, interprets as Lu Xun’s corrosive radicalism: the identity of hope and despair. But – and this is perhaps the political and existential problem that the film’s methodical tension and instability conveys – can this experience, of intensity and unity in and through a seemingly inevitable defeat, be a collective one? Is subjectivity – the shutaisei whose historical figures Masao Miyoshi has compellingly traced – only to be conjugated in the singular? If the failed group, fragmented by reckoning with its fractured past and its futile present, as well as its collapse into a kind of domesticity under duress, is the film’s aesthetic and political material, this is only to the extent that it is polarised, destabilised, haunted and undone by individuals.

The motif so memorably explored in The Man Who Left His Will on Film – the splitting and vanishing of the subject as the index of political and filmic impossibility, there coded as landscape – here takes the form of the haunting of this ‘group-in-fission’ by the dead (Takao), the disappeared (Kitama), and the threatening, if ultimately innocuous, outsider (the poor ‘snitch’).

This melodrama of factionalism is also a ghost story, the tale of a past burdened with missed chances and indelible resentments which continues to stake its claims, in a setting marked by the signs of haunting (the night, the fog, the woods, the wedding halfway between wake and séance).  During the protracted marital and political reckoning, we hear the lament: ‘If the past is to be the foundation of the our future we all must listen. Even if it hurts us.’ But what is also ghostly is the shape taken by a subjectivity that tries to break with the enclosure of the group (the other, potentially ruptural gesture, that of the Trotskyist student irrupting into the wedding,  manifesting his lone fidelity to the struggle, against the Stalinist ‘derelicts’, still appears internal to the sectarian predicament).

Talking to the melancholy humanist professor about his objections to the spy’s imprisonment, Takao speaks these lines, whose poetry embodies the lesson of the equivalence of hope and despair: ‘I understand the nature of the ghost, a faded flower’. Though the desire for revolution, and the subjects driven by it, have indeed faded – into scepticism, dejection, compromise, evasion and suicide – Oshima remains committed to that ‘flower’. But he is also trapped, along with his anxious camera, in a political world that appears to have no exit, in which neither the group nor the subject can live their liberation, without slipping into grinding stasis or sudden crisis.

Noël Burch, To the Distant Observer: Form and Meaning in Japanese Cinema, revised and edited by Annete Michelson, Berkeley: University of California Press, 1979 (with a new introduction by Harry Harootunian, available here: https://www.cjspubs.lsa.umich.edu/electronic/facultyseries/list/series/distantobserver.php).