This is the text of a talk delivered at the ICA launch of the new edition of Allan Sekula’s 1995 book Fish Story. It was a pleasure to share the stage with Laleh Khalili (author of the excellent new preface), Gail Day, Jeroen Verbeek and Ina Steiner.

I want to begin at the very end of Fish Story, and end that is anything but a conclusion, with its final photograph, its final image and its final text. The photograph depicts a somewhat decrepit pier, extending across almost the entirety of the frame, behind which are docked two ships, and which is dominated by an elevated bridge on high white pylons.

The caption reads: “The guided missile destroyer Chandler and an impounded ship used to unsuccessfully attempt to smuggle undocumented immigrants from southern provinces of China to the United States, San Diego harbour. July 1994.” 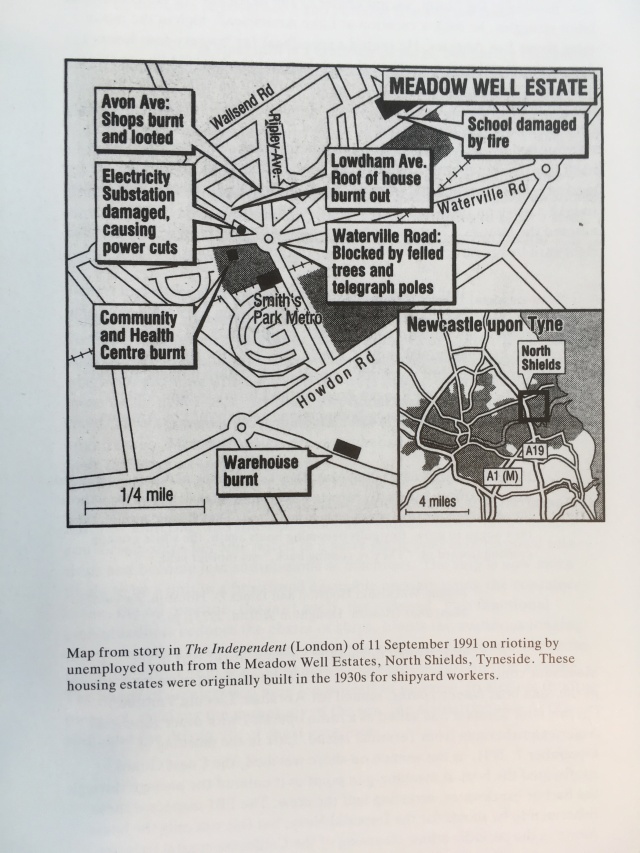 The image is of a map, taken from The Independent newspaper, on September 11, 1991, of riots of unemployed youth in Meadow Well Estate, North Shields, Tyneside, indicating damages to an electricity substation, shops looted and burned, a road blocked by felled trees. As Sekula notes “These housing estates were originally built in the 1930s for shipyard workers”. The final text, fittingly for someone with such a vein of humour, both wistful and fierce, is a “Joke circulating in Poland, 1990”: They are building churches so that people can pray for homes.

From this epilogue alone we can trace all kinds of resonances back through Fish Story – visual, historical, material – from the insurgent waterfronts and maritime insurrections that animate the essay ‘Dismal Science: Part 2’ to the ‘privatised sections’ of the Lenin shipyard of Gdansk photographed in the section ‘Loaves and Fishes’. We can also recall that San Diego was where Sekula alongside Fred Lonidier, Martha Rosler, and Phel Steinmetz “reinvented documentary” when the University was a fulcrum of anti-war activism – pitting Marcuse and Angela Davis against then California governor Ronald Reagan – or that ending on a Polish joke is a wry testament to that dialectical use of his own biography that Sekula so excelled in (and we can think here also of his project Polonia and  Other Fables).

The pairing of the destroyer and the migrant ship is worthy of special pause. That final photograph reminds us that in the contemporary tendency to aestheticise logistics, to freeze our frames on what Sekula memorably names ‘the very coffin of remote labour-power’, the container, we do not just forget the sea, but also the political violence projected through it and the people who traverse it. In Fish Story these are workers ‘in mournful and weary anticipation of unemployment’ (as Sekula writes about the crew of the Sea-Land Quality on which he sailed from Elizabeth New Jersey to Rotterdam in November 1993) – what he elsewhere talks of as ‘canceled workers’, or even B. Traven’s ‘drowned and canceled sailor’ – just as much as they are future workers traveling as cargo on what Sekula terms ‘lines of exploitation’, lines that Fish Story traces with an unparalleled combination of critical force and politicised empathy. As he notes: ‘The “forgetting” of the sea by late-modernist elites parallels its renewed intransigence for desperate third-world populations’, both refuges and ‘those who work the sea lanes’. Sekula – who had explored the nexus of unemployment and the military in an estranged autobiographical light in one of his first works, Aerospace Folktales – here reveals how thinking through this nexus can allow us to grasp, even to resist, the process that has made the harbour come resemble the stock market (the very process that so much photography of the logistical revolution merely sublimates or contemplates in its fascination for the depopulated landscapes of the containerised world).

It is only by grasping the ‘modernity of the military’ that we can cognise how the sea becomes captive to capital, materially as well as visually. In articulating the forgetting of maritime space with the visual and art history of the waning of the panorama, Sekula tells us that the latter was ‘always implicitly or explicitly militarised: the net can close in from the other side of the horizon’. And the move from the ‘panorama to the detail’, that key shift in the aesthetics of the maritime economy, is tracked through its martial mutations – think, for instance of how steam, which already caused an iconographic upheaval in Turner’s sea-paintings, makes it possible for the US naval strategist Alfred Thayer Mahan to subject maritime time to ‘new metronomic industrial regularity’ and maritime space to a modernizing ‘substitution of efficient smooth surfaces for broken, interrupted surfaces’; or reflect on how modernism’s affinity for maritime insurrections is traced via the view of the space below deck as one of ‘claustrophobic social frictions’ and compressed corporeal functions, the ‘physical body and habitus of the sailor’ through Trotsky’s profoundly ambivalent writings on the Kronstadt sailors or the ‘insurrectionary aesthetic of the detail’ to be found in Theodor Plivier’s description of World War 1 sea battles in The Kaiser’s Coolies.

Just as we should not forget, in our present fascination with the smoothness of the logistical, the military over-determinations of the maritime, so, Fish Story teaches us, we should also criticise a homogenising image of circulation, both from above and from below. What I mean by this is that Fish Story is deeply attentive to the materiality and energetic that subtend the transformation of the sea by capital, just as it is also sensitive to the shaping power of abstractions, especially legal abstractions on that transformation. On the same page of Fish Story we are thus both reminded that ‘large-scale material flows remain intractable’ and that flags of convenience, a key component of the new maritime regime, are ‘a legal ruse, a lawyerly piratical dodge. To the victories of steam and the container, we can add the flag of convenience: a new ensign of camouflage and confusion, draped over the superficial clarity of straight lines and boxes’. And as Sekula’s photographic sequences so sharply remind us, in their deflation of the mathematical sublimity of the automated container port, and attention to bodies idle and at work, to everyday spaces, however precarious or marginal, it is the disempowering and dispossession of people in movement that the stratagems for forgetting maritime space ultimately aim at. The flags of convenience are what allow the hyper-exploitation of third-world labour outside of national labour legislation and safety regulations, while the accelerated flows of capital are not just contrasted to the intractability of matter but also to what Sekula calls ‘the glacial caution with which contraband human cargo moves … immigrant-smuggling ships can take longer than seventeenth-century sailing vessels to reach their destinations, spending over a year in miserable and meandering transit. At their lowest depths, capitalist labor markets exhibit a miserly patience’.

Instead of a conclusion, a coda. We are talking about Sekula in England, a place that these days may be said not to have forgotten the sea, but to be plagued by false, recovered memories of its maritime past. This past Sunday the UK defence secretary Gavin Williamson wrote the following commentary for the Daily Express, on the eve of the anniversary of the Battle of Trafalgar – incidentally in the same article where Former navy chief Admiral Lord West thought to remind Jean-Claude Juncker of Nelson’s quote ‘a squadron of British battleships are the best negotiators in Europe’ – ‘Today our ships are in the North Atlantic defending against a rise in Russian aggression. They are stemming the flow of illegal migrants in the Mediterranean. They are keeping precious trading lanes open in the Middle East. And they are enforcing UN sanctions against North Korea in the Indo-Pacific … And as the age of sail turns to the age of cyber, I imagine Nelson would appreciate the way we’re blending the new arts of cyber, information warfare and intelligence into our military power.’

This delusional residue of the English ideology, in the guise of a pathetic managerial jingoism, is just one of the sea-borne delusions to which Fish Story proves such a wonderful antidote.